Anyone get new technology for the holidays?  This year, our phone upgrade went to our younger son, which means now both my kids have an iPhone 6, while I'm still messing around with my 4. But that's okay, because my free time is spent reading, and I've got my Kindle.  If you have a new one to fill up, check out my books below!  There's something for everyone: suspense, mystery, and romance fill the pages of all three.  And don't forget, it's free to download samples from Amazon to see what you might like!  The links are included in the colored font below.  Happy Reading and Happy Holidays!

GULL HARBOR is most people's favorite--this title has been a #1 Kindle Bestseller on several occasions, as well as a Top Ten Reviewer Pick at MyShelf Reviews and a RomCon Reader's Crown Finalist.  A mixture of steamy romance and spooky suspense, this story follows psychic medium Claire Linden as she tries to rid a haunted house of a destructive spirit, while also unraveling the secrets Max Baron is keeping about their past.  A dangerous ghost and an ex-boyfriend await Claire in Cape Cod's Gull Harbor...


SILVER LAKE is my debut title, recently purchased by a larger publisher and also a RomCon Finalist.  The premise of this story is a reunion between a group of former friends who became estranged when their friend Brandy vanished their senior year of high school.  Five years later, the group returns to a lake house from their past in a final attempt to solve the disappearance. Rain Anderson is determined to find closure for Brandy's terminally ill mother, and she's also anxious to reconcile with Jason Lansing, the man whose heart she broke.  As the paranormal activity escalates throughout the summer, it soon becomes clear Brandy's ghost has a message to share...and she's willing to put her friends in danger in order to expose the truth.  A haunting, an old flame, and secrets from the past...


DIVINE FALL is my Young Adult title, suitable for teenagers as well as adults who enjoy YA. This book recently won the Reader's Choice Award in the Young Adult Romance category from The Romance Reviews.  And it's only 99 cents right now!  As the only surviving Nephilim, Dothan Reed is an outcast in both worlds. He'll risk his life to seek his revenge, but will he risk hers?  This title, filled with forbidden first love and supernatural secrets, has been recommended by reviewers for fans of Twilight and The Mortal Instruments.  Revenge, romance, and a rogue fallen angel...

Posted by Kathryn Knight at 11:30 AM No comments:

I love doing posts about the origins of our holidays and the reasons we celebrate in certain ways or fear certain dates.  Some of my most popular posts have been on the Origin of Halloween, Finding Easter's Date, The Number 13, and Origins of Superstitions.

When my kids were younger, I taught Sunday School...in fact, a passage from the Book of Genesis about the Nephilim, the offspring of male angels and human women, inspired my Young Adult Paranormal Romance DIVINE FALL.  For years, I taught the class every week, and my favorite lessons touched on the historical and religious roots of our holidays.  The lesson on Saint Nicholas was obviously something I made sure we discussed every December.  While most people are familiar with the story of Jesus's birth in Bethlehem, many are unaware of how a 4th century Bishop influenced the legend of Santa Claus.

Saint Nicholas, or Nikolaos of Myra, was a bishop in an ancient town in Lycia--now Demre, in the Antalya Province of Turkey.  One of his most well-known deeds involved giving unexpected gifts, one of which landed in a stocking.  In the story, Nicholas wanted to help three young girls, whose father had no money for their dowries.  At that point in history, such a fate would result in a life of prostitution. Not wanting to embarrass the poor father, Nicholas threw bags of gold coins through the windows.  In one version of the tale, the father laid in wait to discover who was doing this...and so instead of throwing the third bag through the window, Nicholas dropped it down the chimney, and it landed in a stocking hung to dry by the fire.

The Dutch figure of Sinterklass is based upon Saint Nick, and he more resembles the white-bearded man in red we're all familiar with. In turn, our Santa Claus is derived from Sinterklass, and it's widely believed that he was introduced to North America around the time of the Revolutionary War, by inhabitants of New York City, which was once New Amsterdam, a Dutch colony.

Of course, many other sources have combined to shape both the modern-day image of Santa Claus and the various legends and traditions which have evolved (decorating trees, sleighs pulled by reindeer, winter feasts and festivals, etc.).  Those will be topics for another day and another blog!

I'm hoping my blog readers who celebrate Christmas have finished the gift-buying and food preparation that comes along with the holiday, and have some time to relax and enjoy the magic of the season.  And if you need a book to help you de-stress, check out one of my novels - each one is filled with romance, mystery, and suspense - something for everyone!  Also perfect as a last-minute gift, since all you need to send someone a Kindle copy is an email address.  Each one is less that the price of a card, and DIVINE FALL is only 99 cents right now!  The tabs at the top of the page will take you to the blurb for each book, but I've also included links below.  Happiest of holidays!

SILVER LAKE - A haunting, an old flame, and secrets from the past

DIVINE FALL - Romance, Revenge, and a Rogue Fallen Angel
Posted by Kathryn Knight at 10:00 AM 3 comments:

Every December, my publisher puts out a free gift--the annual "Holiday Garden Gourmet" Recipe Book.  In the fall, our marketing directer puts out the call for ideas for themes, and the authors of The Wild Rose Press vote.  This year, we came up with "Cookies and Cocktails"--the perfect combo for celebrating with family and friends this season (not to mention a few of my favorite things!).

The authors offer up with original recipes, often passed down through the family, and contribute to the book, which is then offered on our website as a free pdf download.  You can find it right here: Cookies and Cocktails.

While you're there, you can check out the offerings from previous years in our Free Reads section, as they are still available for download.  Last year's theme was quick and easy meals.  I've contributed every year since my first book came out, in 2012.  This year, I share my family's Holiday Rum Punch recipe.  Christmas brunch didn't feel complete without it, and my siblings even gave me a beautiful glass punch bowl as a wedding gift so I could continue the tradition.


And don't forget that reading is a healthy way to reduce stress, which seems to go hand-in-hand with the holidays.  My novels are a page-turning mix of haunting suspense and steamy romance, so consider downloading the #1 Kindle Bestseller GULL HARBOR for when you have a little downtime!  My other titles include SILVER LAKE and the Young Adult paranormal romance DIVINE FALL, with the new HAUNTED SOULS on the way.  Happy Holidays!

Posted by Kathryn Knight at 4:09 PM No comments:

Tomorrow is a big day!  Before Thanksgiving, I received an email from an ELA teacher at the local high school, asking if I'd like to come in as a guest speaker in his Creative Writing Class.  Of course I said yes--what an opportunity to share my passion for writing!  I've been teaching a course on Fiction Writing for the local community college for a while now, and my adult participants have all seemed to really enjoy it--but I have little experience creating a lesson plan for a single visit to a class of high school students.

The teacher and I exchanged emails until we worked out a topic for discussion: Goal, Motivation, and Conflict, which is something I spend quite a bit of time on in my own class.  But with the time constraints, we needed to come up with some short examples to analyze after the lecture.  We tossed around a few ideas, and then I hit on something I hope will be engaging, interesting, and effective: two Greek myths full of drama, action, and tragedy.  Once I review the concepts of GMC, we will work as a group to build the GMC charts for several of the characters in each myth.

Then the teacher came up with a great idea for an accompanying exercise for the students after the discussion.  They're going to break into groups and visit the amazing Humans of New York site (HONY).  Many of the stories that accompany the photos reveal the subject's struggle--and often, in the longer stories, it is possible to discern the very real elements of GMC that people face every day.  Students will pick one of the photos and tell us about that person in terms of their goal (what they hope for or dream of), their motivation (why they want this), and the conflict (what they will have to overcome to achieve their dream).  This should be a powerful discussion.

I truly hope the class finds the lesson useful and educational.  And in an odd twist, I discovered that the Beta reader I worked with for DIVINE FALL, my Young Adult Paranormal Romance, is in the class!  Since the protagonist in the book is a 16-year-old girl, and I am not, I contacted the school's volunteer office a few years ago to see if anyone was interested in taking on the project.  So I will get to thank her personally once again, and perhaps motivate some other aspiring writers to become Beta readers in order to learn more about the process.

It is late and the class is early, so I need to get to bed.  Fingers crossed for a great class tomorrow.

Posted by Kathryn Knight at 10:44 PM No comments:

DIVINE FALL is up for the Red Carpet Award! #YA #angels #romance

Over the summer, DIVINE FALL received a fabulous 4.5 star review from BTS eMag, calling it a "delicious YA filled with love, rich in history, suspense, and enough twists to keep the reader turning the pages".  The reviewer also said it was perfect for fans of The Mortal Instruments series, which had me grinning ear to ear. 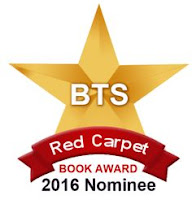 Books the receive high reviews in their magazine automatically get nominated for their Red Carpet Book Awards, which is very exciting!  I'll admit, with the voting period over our crazy Thanksgiving travels, I'm way behind on asking people to vote.  But I'd still love to get a few before the voting closes on December 8th.

So if you have time for one click -- no sign in, no registration -- I'd appreciate it!  The voting link is HERE, and Divine Fall is a little less than halfway down.  Thank you!  And if you want to give it a read, it's currently only 99 cents - less than a cup of coffee for hours of entertainment involving forbidden first love and supernatural secrets.  Find it on Kindle here and the blurb and other retailers here. 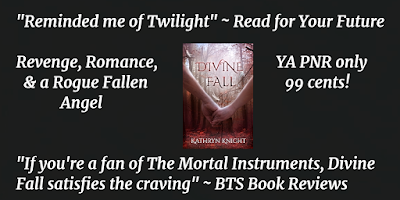 Posted by Kathryn Knight at 8:55 AM No comments: